Cody & Mandi’s Branson proposal was one of my favorite proposals of 2022! Cody planned an absolutely great proposal! Not only did he surprise Mandi with a ring at Top of the Rock, he also surprised her with her family! She had no idea they had followed them to Top of the Rock to witness the proposal! If you’re looking for a Branson proposal photographer, head on over to my contact form. I photograph more proposals in Branson than anyone else, and I absolutely love doing it! I would love the opportunity help you plan and capture that special day!

A lot of our proposals are at Top of the Rock right by the chapel, and that’s where Cody wanted to propose! Top of the Rock is gorgeous, and after the proposal and engagement photos, most couples have dinner reservations at the restaurant right there. At sunset they also shoot off a cannon which is pretty cool, and is a great end to a memorable evening. 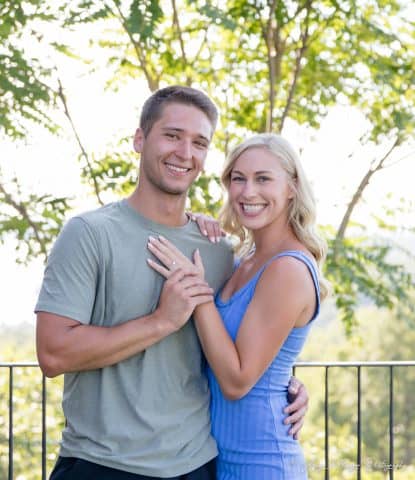 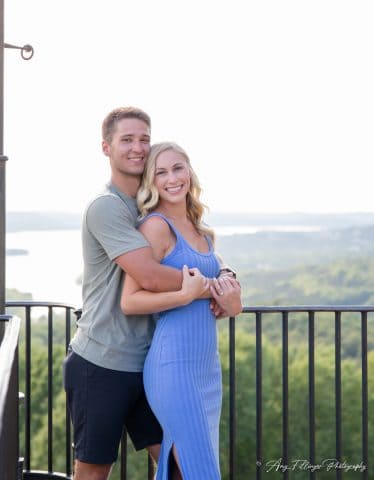 TOP OF THE ROCK PROPOSAL

Getting down to the chapel at Top of the Rock can be a little confusing for first time goers. Cody and Mandi somehow ended up coming down some rocks and onto the golf course that borders the chapel area, and to this day none of us are sure how that happened! I watched them come down the golf course from the restaurant area and approached them to let them know the gates would be locked and they’d have to climb over. I have to say that climbing over a fence in a dress is impressive, but Mandi did it with ease! Once they were over the fence, I went back to blending in and pretending to photograph random things. Cody then led Mandi over to the area he wanted to propose at, and the rest is history! 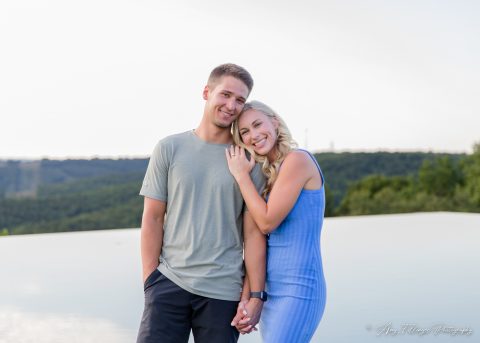 This isn’t the first time I’ve had to approach a client that I was supposed to be “hiding” from, and it won’t be the last. Thankfully, I am pretty quick on my feet and just pretend to be a friendly stranger helping out with whatever issue has popped up for the proposal. I once had to approach a client at Top of the Rock and pretend I was waiting for a family because the elevator to the chapel was closed and our originally agreed upon area wasn’t accessible. I kind of gestured to where would be the best spot for photos, and said that the view was “pretty” over on that balcony. Thankfully that client picked up on my hint and that proposal also went off without another hitch while his soon-to-be fiancé had no clue I was there for them!

Even though it was the middle of July, it was the perfect evening for photos! We got super lucky with some overcast and that allowed us to get some awesome photos we can’t normally get when the sun is out, and we also lucked out with an incredible sunset!

Thanks for checking out Cody & Mandi’s Top of the Rock Proposal.

One last time, if you need a Branson proposal photographer yourself, you can contact me or email me directly at virginia@amyfillingerphotography.com.

If you’d like to see more Branson proposal ideas, check out some of my other recent blog posts:

If you’re planning a small wedding or elopement in Branson, check out a couple of my recent Branson weddings.

Check out some of our senior portraits:

Thanks for checking out this blog post. Congratulations again, Cody and Mandi!